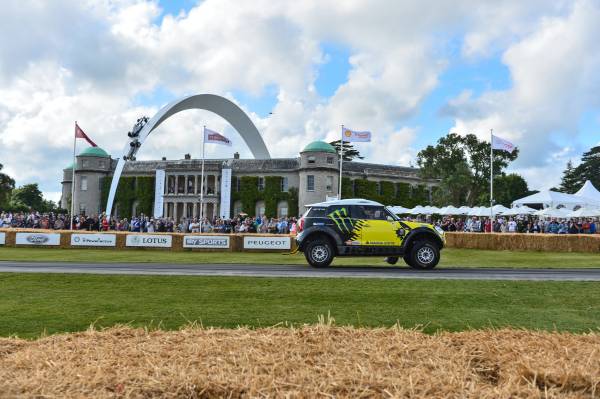 From Goodwood to the Baja Arágon: Dakar Rally winner Nani Roma and the MINI ALL4 Racing ready for the next challenge.

First things first was the motto for Joan “Nani” Roma (ES) when the 2014 Dakar Rally winner visited the iconic Goodwood Festival of Speed in England before he will be heading for the 2014 Baja Arágon in Spain later this month. During the world famous motorsport event Roma competed in the spectacular 2.86 kilometre hill-climb race in front of thousands of motorsport enthusiasts from around the globe. Alongside Roma: his powerful yellow MINI ALL4 Racing in which he claimed the Dakar victory for the MINI brand and the Monster Energy X-raid Team just over five months ago in the world’s most demanding long-distance rally.
Instead of gravel and sand, Goodwood’s hill-climb race was all tarmac for Roma and the MINI ALL4 Racing which is based on the MINI John Cooper Works Countryman. With three consecutive Dakar victories to its name, the MINI ALL4 Racing is a proven master on loose surfaces, in Goodwood the MINI convincingly showed that it performs on tarmac as well, even though the hill-climb race is not about who finishes first but about celebrating pure motorsport passion.

On the Goodwood grounds, Roma and the MINI ALL4 Racing also met another iconic MINI pairing: Rally Monte Carlo winner Paddy Hopkirk (GB) and his classic Mini Cooper S which – 50 years ago – claimed the 1964 Monte victory. To celebrate the anniversary, the two drivers and cars started the hill-climb race in succession. “It was a huge and very special event,” said Roma while Hopkirk went on to praise the uniqueness of the MINI cars, old and new alike: “The MINI was a unique car at the time and it is still a unique car today.”

The next time that Roma gets behind the wheel of his MINI ALL4 Racing it will be for start of the Baja Arágon (18th-20th July 2014) which is the sixth round of the 2014 FIA World Cup for Cross-Country Rallies. While Roma seeks to claim his second Baja Arágon victory in a row after winning the event in 2013, the X-raid Team’s Vladimir Vasilyev (RU) aims to extend his 39-point lead in the overall classifications over Yazeed Al-Rahji (SA). During the Baja Arágon both drivers, Roma and Vasilyev, will be back in their MINI ALL4 Racing, respectively. The event will be held in the province of Teruel, some 250 kilometres to the east of Spain’s capital Madrid, and holds approximately 1,000 competitive kilometres on rough tracks.

Race calendar for the FIA World Cup for Cross-Country Rallies.