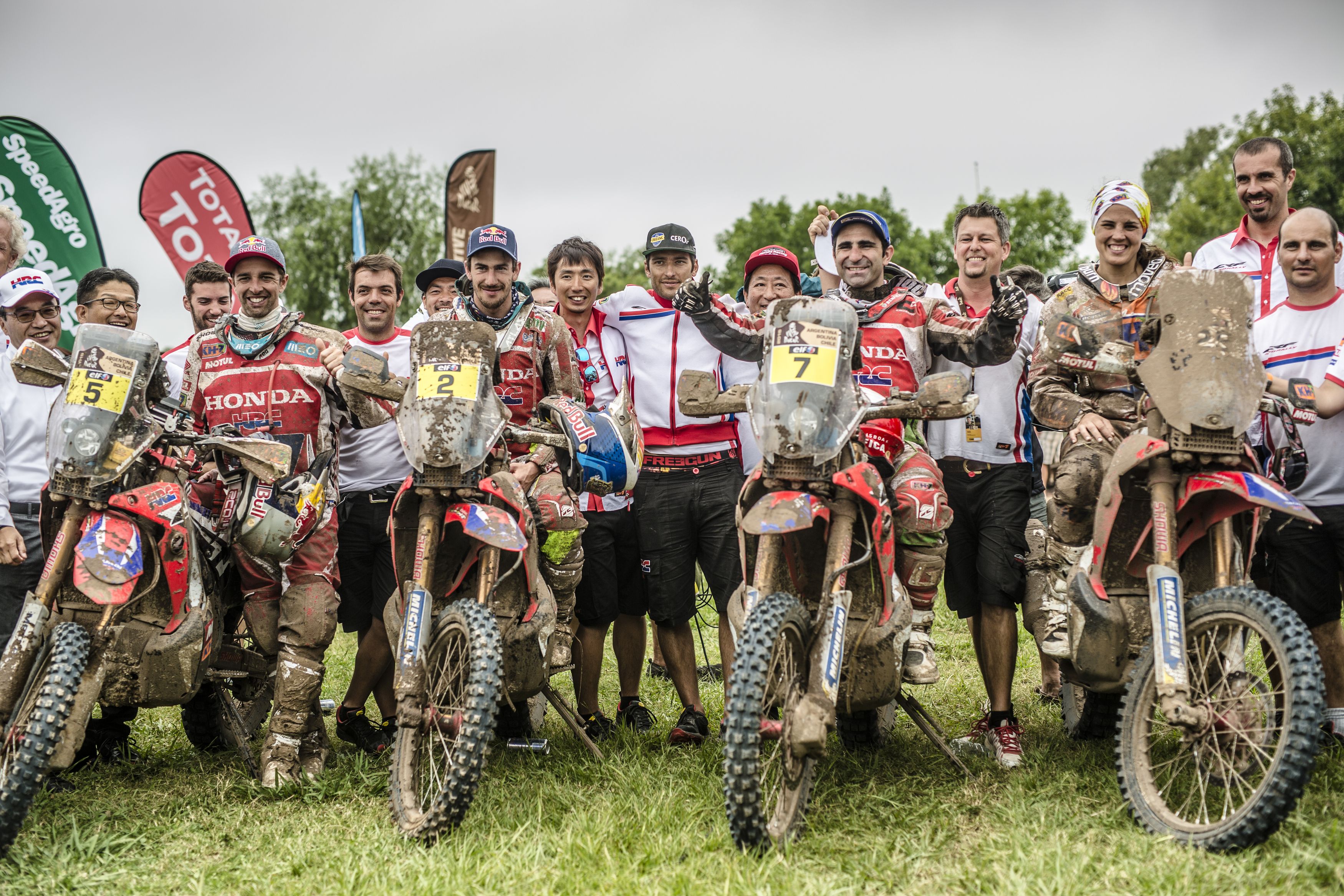 Team HRC will be back

Seven stage victories, leaders for half the rally, overall runner-up place for Paulo Gonçalves
and ninth spot for Laia Sanz, add up to a more-than-positive final report-card for Honda and
Team HRC at the Rally Dakar 2015. The team will be back next year to win.

Just one day after the end of the Rally Dakar 2015 and Team HRC already have their sights on the
2016 edition. Important conclusions drawn from this year’s event will form the backbone of work to
be carried out in preparation for Dakar 2016.

After an almost twenty-five year official absence from the race, Team HRC have retaken the
world’s most gruelling rally by storm, scoring the greatest number of stage victories. The ‘all for
one’ work ethic, the ability to overcome every type of adversity, and the never-say-die approach,
make it the team to be reckoned with.

It was a genuine challenge for the riders and the team responded accordingly with great
competitiveness from both riders and machines. The Honda CRF450 RALLY passes the test with
flying colours, with four of the five bikes making it to Buenos Aires over every type of possible
terrain, at sea-level or at over 4,000 metres altitude, on route through Argentina, Chile and Bolivia.

Joan Barreda proved to be an unyielding leader throughout the first week of rally and only a highlycontroversial decision to race in perilous conditions robbed the Spaniard of final victory. Barreda
collected more stages than any other in the Dakar 2015 and showed an unparallel level of
competitiveness, hunger for speed, dexterity at navigation, sharp strategy, and above all leadership
for Team HRC.

Paulo Gonçalves, similarly to Barreda, was in the running against a tough rival. The Portuguese ace
finished as an exceptional runner-up not far off the eventual overall winner in Buenos Aires.

Likewise, Hélder Rodrigues, two-time stage winner, and Jeremías Israel, put in fine unselfish
performances and were always on hand whenever the team was in need.

A brilliant Laia Sanz shone throughout, surpassing all her own objectives and setting precedents by
finishing higher than any other female in the entire history of the Dakar as she rubbed shoulders
with the elite of the cross-country rally competition.
See you in the Dakar 2016!

Martino Bianchi
Team HRC General Manager
The final evaluation is, of course, good. We are on the podium, and we haven’t been on
there for many years, so we deserve it. We have proved that we are very close to being
the top in this race. We’ve shown everyone the potential of this project. The bike is very
fast and the team is working very well, and our riders are very well-prepared to be able
to win this it. We had a few unlucky situations, but we won seven out of thirteen stages
and we won these with three different riders. So this is also something important, that
we have shown our potential. I wish to thank everyone for the great work that they have
done so far, and let’s do a bit of fine-tuning to reach the target in the next edition of the
Dakar.

Taichi Honda
Team HRC Technical Director
I’m pleased with the results, but a bit disappointed because we had a few setbacks
during the race. Fortunately, the team was able to work together in those moments as if
it were one rider. Paulo finished second and Laia ninth and that’s really good. The bike’s
performance was better than last year’s, and we have discovered some issues that we
will be able to work on before next year, and we will be back at the Dakar with the
highest expectations.

Wolfgang Fischer
Team HRC Team Manager
So the 2015 Dakar is over, with a smile in one eye and a tear in the other. Of course, we
didn’t achieve our main target to win the race. We tried everything. We had the tools for
it. We had the team for it. We had the bike, but in the end it wasn’t the race for us to
make it all happen. On the other hand, we can be really happy to have the second place.
Achieving that with Paulo Goncalves is really the spirit of the team. It shows the quality
of the team and its teamwork together, and we are really proud of this. Now we can
build a really strong team, and are now looking forward to coming back at the next one
even stronger. Next time we will do it in the second week, the way we did in the first
week. Thanks to everybody in the team, and thanks for the great cooperation and for the
strong belief in our commitments.