Cairoli and Seewer Win the MXGP of Germany 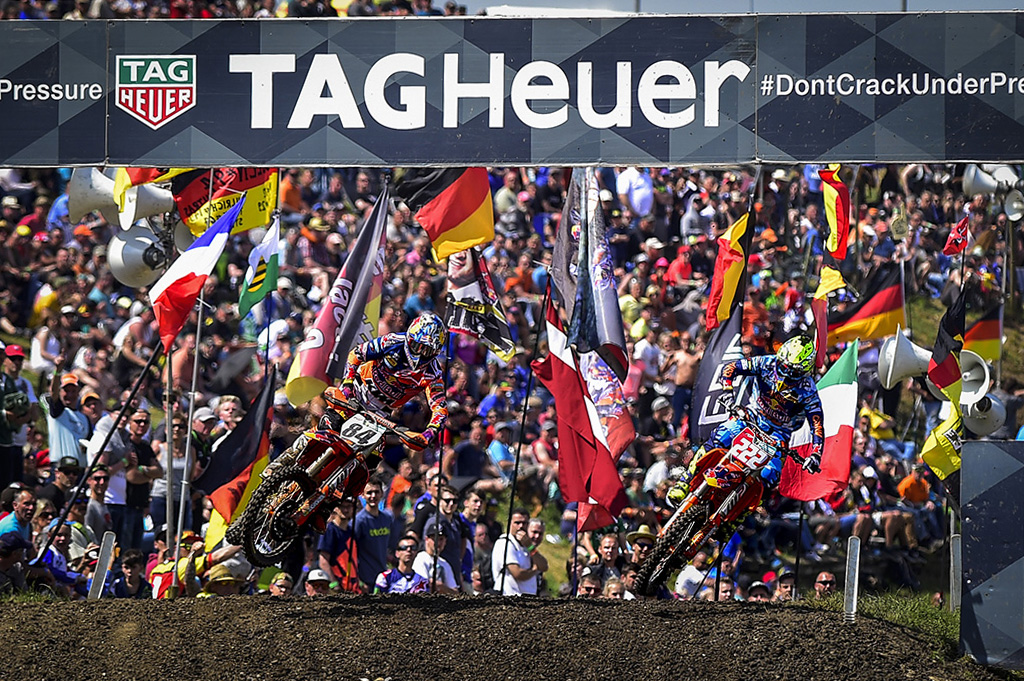 Cairoli and Seewer Win the MXGP of Germany

Red Bull KTM Factory Racing’s Antonio Cairoli’s fight back to the top of MXGP is one he is winning, scoring his 80th victory of his career today, Cairoli extended his championship lead to 44 points. To start both races Cairoli took the FOX Holeshot but in the first half of race one he lost the lead after struggling to find the fast lines and he finished second. Cairoli knew coming into race 2 if he would win the race than the overall was his and that is exactly what he did finishing nearly 6 seconds ahead of 2nd place. Cairoli in the press conference said, “I got really good starts today and this is what we have been working on. I’m really happy with the GP win and also extending the points lead this is very good. It’s a very special track for me I’m very happy to race here in Germany and Teutschenthal is one of my favorite hard pack tracks, it is similar soil to the track I train on… I’m already looking forward to the next GP in France there is always so many fans and it’s a nice track.”

The “Bullet”, Red Bull KTM Factory Racing’s Jeffrey Herlings, came out with a bang in race 1 as he passed Cairoli early and led through to the checkered flag. Herlings season is starting to come around but one thing that plagued him early this year was his starts and in race 2 a start outside the top 5 hindered him once again. Making his way forward and into second took much longer in race 2 and Herlings was unable to close the gap Cairoli had built. Herlings in the post race press conference said, “In the first race I was in second pretty quick but in the second one I was around 10th on the first turn and had to work my up to second, I burned to much energy. He (Cairoli) is the eight-time champ for a reason, he’s a great rider and I just couldn’t close the gap.”

Another rider who challenged Herlings in Teutschenthal was Rockstar Energy Husqvarna Factory Racing’s Gautier Paulin. Paulin fought for position with Herlings in both races but in race 2 put in a late charge to catch the #84 but by the end it was too little too late for Paulin. Two third place finishes placed the Frenchman back on the podium before heading to his home GP next weekend. Paulin in the press conference stated, “Third and third today is consistent but  we didn’t put everything together so we need to keep working to get better.”

Monster Energy Kawasaki Racing Team’s Clement Desalle is becoming a consistent face in the top 5 of MXGP. Desalle had another good weekend of racing as he went 4-4, placing fourth overall and scoring 36 championship points. The number 25 is also 4th in the championship standings coming out of Germany and into France.

Behind Desalle was the second French rider in the top 5, Monster Energy Yamaha Factory Racing’s Romain Febvre who has struggled so far this season but triumphed this weekend comparatively with 7-5 finishes. Febvre showed speed both days qualifying 5th and battling with team mate Jeremy Van Horebeek among others. Van Horebeek who is 5th in the championship standings finished 5th in race 1 and he was in the same position in race 2 until he fell picking himself up 20th and finishing 15th for 10th overall.

Team HRC rider Tim Gajser showed some serious determination and toughness fighting through pain today. The 20 year old Slovenian’s qualifying crash aggravated his already sore body. Gajser after the race said, “This has been a tough weekend. Thinking about it, it has probably been one of the toughest weekends I have ever had.” With the championship in mind Gajser pushed his way to 11th overall with 12-10 finishes.

German rider, Rockstar Energy Husqvarna Factory Racing’s Max Nagl, was motivated by his home GP fans and after a 10th in race 1 the hometown hero improved his start and finished 8th in race 2 for 8th overall.

Team Suzuki World MX2’s Jeremy Seewer has struggled with mistakes the past few races but he has had the speed and today it showed as he won his second career overall, the first in Europe. Seewer was 5th on the first lap of race 1 and he came out on a mission passing one competitor after another including his title rival in straight up racing fashion. In race 2 the Swiss rider nearly went down after landing on the back tire of Red Bull KTM Factory Racing’s Jorge Prado Garcia. Seewer in the press conference said, “It feels great to win in normal conditions, especially the first race I could make it happen pretty well. In the second race I was really lucky on the first lap with Jorge (Prado) I’m sorry for that but it was just a race incident, I nearly crashed and lost some spots… I recovered well and managed to win the GP. I’m looking forward already for the next races, also Ernèe, I like that track, I’ve raced there twice and did well.”

A new Suzuki rider found his way to the podium today, Seewer’s Suzuki World MX2 team mate Hunter Lawrence. Lawrence won here last year in EMX250 and he rode the best ever in his MX2 career on his way to 2nd overall today. 4th in race 1 and 3rd in race 2 he battled throughout both consistently moving forward without error. Lawrence in the press conference stated: “It is cool to have a 1-2 for Suzuki, that is awesome for the team and also for myself as a refreshment for all the hard work.”

Rounding out the MX2 podium was red plate holder and Red Bull KTM Factory Racing rider Pauls Jonass. Jonass clearly has his starts dialed, he took both Fox Holeshots, but he struggled to find rhythm or comfort on today’s rutted circuit. Falling off the lead pace both races finishing 2nd and then 5th, the Latvian was surprised he reached the podium. Jonass in the press conference said: “I was really surprised I was still on the podium after the second race because it didn’t go as I wanted. It’s pretty good to get some decent points and the championship still looks pretty good. We will make some improvements this week.”

The two Rockstar Energy Husqvarna Factory Racing riders of Thomas Covington and Thomas Kjer Olsen swapped luck in Germany. In race 1 it was Covington who faced adversity starting 31st and clawing his way through the pack to 14th. In race 2 Olsen would crash and salvage a 12th place. While race 1 was bad for Covington it was good to Olsen as he took third. The yin and yang continued when Covington charged into the lead and won race 2. After the drama was all said and done Covington took fourth overall while Olsen took 5th.

It was also an up and down story for Husqvarna Maurer-GEP Racing’s Brian Hsu who at his home GP finished 5th in race 1 but 30th in race 2 for 13th overall.

HRC MX2’s Michele Cervellin had one of the best weekends of his career, he qualified fourth yesterday and followed it up with two top five starts and 6-8 finishes today for 7th overall.

MXGP was available across the board in high definition and was also globally available to view live and in HD on MXGP-TV.com. Here below the MXGP-TV LIVE Program and by clicking here you can check the complete list of countries and cooperating MXGP broadcasting networks.

The next round of the FIM Motocross World Championship will be held in one week time in Ernèe for the Fiat Professional MXGP of France.